I'm trying to figure out a baseline water use for a hospital. 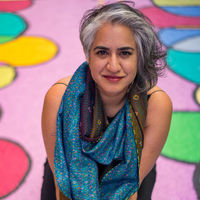 I would start by defining your user groups and what fixtures they will be using.
For example, if you have 100 patient rooms and all of them have the same type of sink and a private restroom fixtures, you could define the patients as one user group. You would then run the use calculations for each fixture in that user group at the conventional EPAct rates.

* 100 people washing their hand in the sink every time they used the restroom 3 times a day x 0.5 g/l

Another user group would might be the nurse station, etc. You would run the base case water uses for each user group.

Although I haven't seen the v3 credit template for this (are samples available for download?), if it is similar to v2.2, then patients are considered residents; staff (nurses, doctors, etc.) are considered FTEs and family are considered transient visitors. This gives the standard fixture use rates. Challenge 1 is that FTEs can be very hard to pin down for a single building that is a part of a larger hospital campus, and that family numbers are just estimates. Challenge 2 is that staff wash their hands many, many times more than the basic LEED rates; there are estimates of up to 12x per hour -- yes, hour -- though I think that is high for most circumstances. Challenge 3 is that some regions have flow rates dictated by code that are different than the EPAct rates. Challenge 4 is that any product with aeration is prohibited for infection control purposes; only laminar flow products are permissible, and there are fewer of them available. Challenge 5 is that very low flow faucets (like the ones required) can potentially take a long time to get to hot, depending on how the hot water loop is set up -- this is a big problem for surgeons and others. (These are just a few of the challenges... are you excited yet?) A lot of hospital projects have shied away from this v2.2 credit given the challenges, but that won't be an option any more. Good luck.

I still have issues about Mara's 2nd challenge from above: "Challenge 2 is that staff wash their hands many, many times more than the basic LEED rates; there are estimates of up to 12x per hour -- yes, hour -- though I think that is high for most circumstances."

In NCv2.2 CIR dated 2/1/0/09, exam room sinks were designated as process usage. This issue is not addressed in the LEED-BD&C 2009 Ref. Guide (maybe I am missing it) and the CIR not longer applies.

What do we do with the exam sink usage for the 2009 rating systems?

Briana, I'm not sure which you have an issue with: that staff wash their hands so many times, or how to deal with the sinks that they use in LEED. The first issue is definitely debatable, and depends a lot on individual facility culture. In theory, staff are required to wash hands between patients, and they often see up to 12 patients per hour. However, some facilities push gels in liu of washes (lots of opinionated backstory here...), and at others the patient count may be lower.

As for how to qualify the sinks used for handwashing, I think it depends on the circumstances. In theory, any sink in a hospital outside of public or staff restrooms could be considered clinical. However, in many buildings the bulk of those sinks are only or mostly used for handwashing, over and over again. In v 2.2, I had heard of projects that included sinks only or primarily meant for handwashing in the LEED calcs -- for example, sinks between corridors and patient rooms. Exam room sinks, which are often used for many things, would (as the CIR states) be considered process. All of these areas are somewhat gray, and I can definitely agree with arguments on both sides, depending on the situation.

As for LEED 2009, I don't think any of us can do much other than guess, though I definitely encourage anyone who hears more to share their interpretations with the LEED User community.