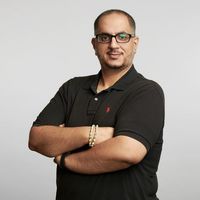 We have a project that is part of a campus and has a significant PV array that offsets about 35% of the building's energy costs. However, the generated electricity does not go directly to the building. Rather, the campus management has a sub group that holds the RECs. The intention here is to buy other RECs to replace the renewable energy produced by the on-site PV panel.

My question is, can I count the energy generated by the on-site panels towards EAp2 "Minimum Energy Performance" and EAc1 "Optimize Energy Performance"? If not, can the RECs purchased to replace that energy be counted towards these credits?

I found a CIR for EAc2 "On-Site Renewable Energy" explains that in a similar situation, it seems that we need to buy twice as much RECs in order to have the RECs count towards the project. In their explanation, LEED says this is due to the difference in costs/incentives of producing RECs across state borders (I don't really get it). A later CIR issued 8/21/2009 (http://www.usgbc.org/content/li-2594) backtracked and indicated buying RECs for 100% of the generated energy is enough. However, these CIRs aren't clear about using the energy for EAc1.

You can count the renewable energy toward EAc1. The owner needs to allocate a portion (or all) of the output of the campus system to this project and it can't be counted for any other project. If the RECs have not been retained and need to be replaced you need to only replace 100%. If you do these things you can count it toward EAc1 and EAc2. Purchasing RECs in general do not apply to these ceredits beyond the replacement requirement.

Thanks a million Marcus!

Is there any reference you can direct me to? I'd like to make a strong case in the event I get any questions from the reviewer or client/design team. I tried the reference guide for 2009 and looked up the CIRs on the website but couldn't find any material I can reference.

If you look at the prerequisite form for EAp2 (which determines your EAc1 points), Section 1.8 is where you enter the renewable energy production. You will not get any question from the reviewer as long as there is clear allocation, REC ownership or replacement, and the calculation of production is reasonable.